The baroque church of Valloire 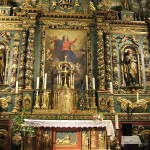 The church is partly built on an erratic block left by the Valloirette glacier in the middle of the valley. It is surrounded by “Place” (the houses of the county town). The church can be seen from all the hamlets around except those in the “Tiers Dessus”, from which it is hidden by the curve of the valley and by the Rocher Saint-Pierre. The current parish church Notre-Dame de l’Assomption replaced a smaller pre-existing building, probably a Romanesque church. It was re-built and decorated between 1630 and 1682 in baroque style, as many churches in the area, due to Savoie’s territory spreading over both sides of the Alps. The re-building was driven by the growth of the population (more than 3000 inhabitants in the 1630’s) and, in the wake of the Council of Trent, by the determination of the Catholic Church supported by the bishops and the priest of Valloire (a strong character named Pierre Dupré, the priest of the village for 40 years) to strengthen faith. Hence the exaltation of colours and the profusion of angels and garlands in the gypsum work over the large retable by François Rimelin from Chambéry. Hence also the golden tabernacle over the altar, reminiscent of the importance of the Eucharist. The church is also fitted with eight lateral altars whose paintings recall the devotions of the era of pilgrimages in Piemonte (Oropa), or by the Adriatic Sea (Loreto). The arch over the nave is a trompe-l’œil with medallions showing scenes of the lives of the Virgin Mary and Jesus Christ. The furniture and decoration are very rich. They give real prestige to the building, a Monument Historique since 1945. 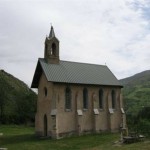 For travellers on their way down to the Valloire basin, the Galibier is hidden from sight by the twin limestone spurs of Poingt-Ravier and the Rocher Saint-Pierre, a glacial bolt. Half-way down the slope, hikers can admire a wonderful neo-gothic chapel, Saint-Pierre, built in 1858. The building stands alone, close to a grassy mound once topped by a castle which belonged to the Maurienne bishops who exacted taxes in kind and corvée labour from the inhabitants of Valloire. Soon, people of note dwelling in beautiful village houses served as castellans on behalf of the bishop. As early as the 16th century, the castle was a mere ruin. Upwards to the left, the ski run has erased nearly all trace of the village of Les Sellettes, whose inhabitants used the castle chapel as a place of worship. Some Valloire people remember that this village was still inhabited in the 50’s; only the ruins of two houses remain amid a copse which thus obliterates the very existence of the village. 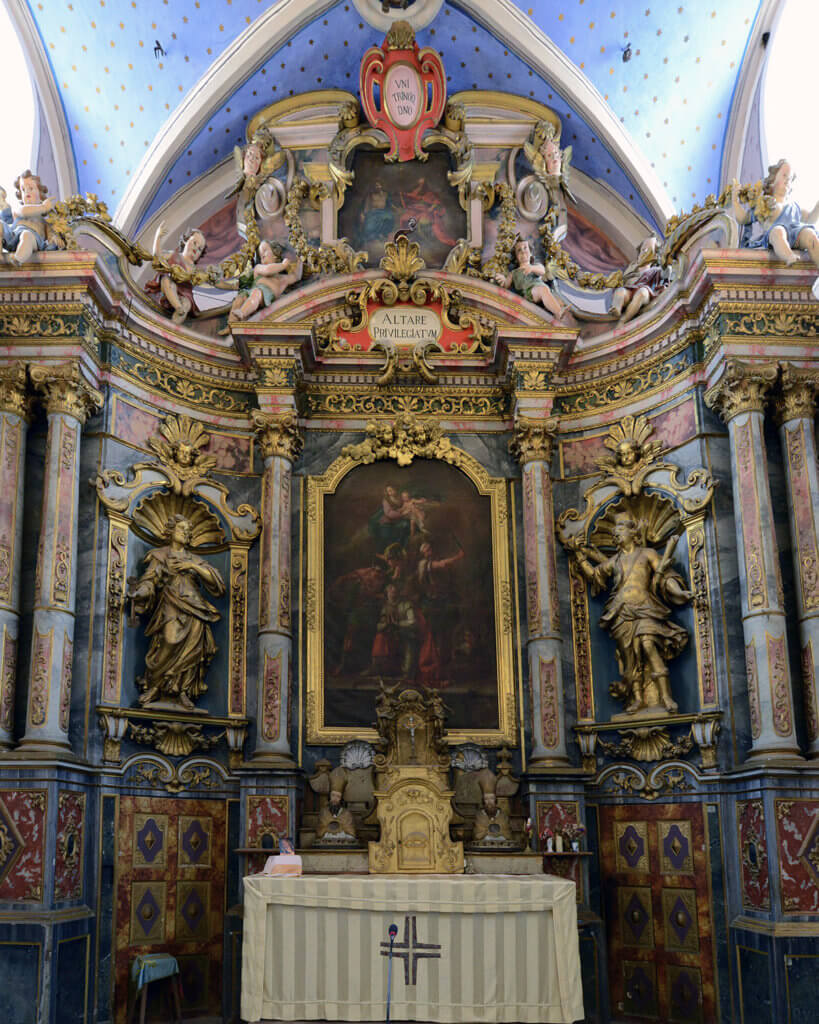 Located near Aiguebelle, on Les Chemins du baroque, this church based on roman foundations was rebuilt in the baroque style in the early 1700s. Listed M.H., the retable, built and sculpted by the Cuenot workshop, and the communion table, were bought from a Chambéry church in 1771.
30 ft. high, curved, the retable is in the urban baroque style. The central painting represents Saint Alban, the first English martyr of the 3rd century. On either side, columns with Corinthian capitals adorned with acanthus leaves frame the statues of St Peter and St Sebastian, crowned with a shell, the symbol of immortality. The attic panel represents God the Father and his son above a garland of cherubs. The frescoed red stage curtain refers to the transience of human life. One of the two transept retables, also baroque, bears Regis de Tiny’s coat of arms.
In 1887, a first restoration with trompe l’oeil paintings is performed by the Gilardi. In 1999, INIS, the internationally known artist from Maurienne, carries out a second true to style restoration with period techniques.

The Association Cinéma et Culture Maurienne has managed this venue since 1992, providing programmes of cultural events and film content, for all.
Its cinema, categorised ART & ESSAI, offers 8 to 10 film shows per week and special shows for children and families, isolated audiences, residents of retirement homes, schools… Every year, the stage hosts some fifteen performances: drama, dance, circus, tales, music, puppetry, digital art. A number of cultural mediation initiatives are organised around these events: meetings, debates, workshops… The hall has a seating capacity of up to 188.
Finally, each and every one in their own way can get involved in the association’s dynamics and thus, more than just a spectator, become a real actor of their cultural life.

Since 2018, La Traverse concerts venue (except for the Valloire enchanté concert)
This magnificent multipurpose hall was built above the fire station; it hosts many cultural events organized by the municipality. It is named after one of the great pioneers of winter tourism in Valloire, creator, since 1937, of the first ski lift of the station.

Following, places of previous Musical promenade and Concerts of La Traverse around Valloire 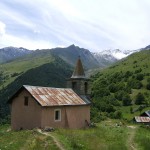 This chapel, built just above the hamlet in 1624, stands as a landmark for the inhabitants of the Tiers Dessus. The porch is fitted with a bell tower. Decorations inside are sober, with a picture above the altar representing Mary-Magdalene pouring perfume on Jesus-Christ’s feet. This devotion grew over the 17th century when Magdalene, after Saint Bernard of the Alps, became the patron saint of transalpine passages. Indeed, from the valley of the Valloirette, passages lead left to the Rochille pass and right to the Galibier pass, then across the border between Savoie and French Dauphiné. 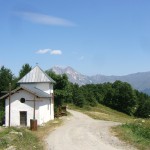 Forget the road. Take the footpath lined with wild grass, stone-walled goat pens, and alder trees baring their old scars to the heavens.
Take the footpath men have cleared for the mules and their load, or the trail the sheep have worn into the earth to ease the burden of shepherds. Follow this path, a mountain pass, come rain, hail or shine, and keep to it till you reach the Notre Dame de Vie chapel, where three wooden crosses enfold the landscape in their arms. Take the footpath, then rest your backpack on the flowery grass and forget the road.

Bonnenuit… Funny name for a mountain village! It is the first hamlet in the vicinity of Valloire, on the way down from the Galibier pass. It long held the largest number of inhabitants, with fifty families living there in the 19th century. The name is said to come from the auspicious writing on an inn sign. Over time, Bonnenuit has in turns witnessed the passage of the armies of King François Ist, lnfante Philip of Spain, and Maréchal De Berwick, under King Louis XV. Today, the gunners’ firing range is within earshot!
Look up. Once a dreaded menace, a torrent rolls down from Sétaz-Vieille. Across stand the three Aiguilles d’Arves, where the first traces of mountain boots were left by the Magnin brothers, from Valloire, back in 1839… In front of us, as a backdrop, the cocked hat of the Grand-Galibier. The Galibier stands guard over the valley, together with Saint Gras and Notre-Dame des neiges, still revered in two chapels. Yet again, on the slope across the Valloirette, see the herds of chamois grazing under the watch of a solitary, benevolent cembro pine-tree.
Often enough, baby marmots will tumble into view on the paths around Bonnenuit, quickly summoned back to safety by their vigilant mother. When the night breeze flows down the valley, its music lifts our hearts heavenward. 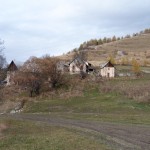 Until the 19th century, Poingt-Rogereil was inhabited all the year round. Distant from other villages, isolated in winter when the mule track was closed, it was eventually deserted. Not long ago, a ski track, down from the Crey du Quart, ran through the dormant hamlet.
Today, it comes to life again thanks to a summer sheepfold and a few rehabilitated chalets, and when trekkers walk through, down from the Trois Croix or from the Aiguille Noire valley.
“Poingt” comes from the Latin word “podium” and means hillock. “Rogereil” is a trace of “Roger” and “Rogereaux”, family names now extinct. However, Blaise Rogerel gave his name to the chapel he founded at l’Archat, in 1653, when baroque arts were flourishing … still there for us to enjoy.

Thanks to the determination of “Valloire Art Contemporain” and “Les Amis du Festival Valloire baroque”, two local associations, the Sawmill is again full of life. Martine RAPIN, the owner, recalls what happy and unhappy memories are linked to its past: “The Sawmill belonged to my father; he had a passion for wood. The place was extraordinary: whole trees would be hauled down from neighbouring forests to be sawed up in planks and eventually transformed into all sorts of objects he loved to assemble. Then the mudslide wrecked it all, as well as my father’s morale…” To honour the memory of her father, M. RAPIN has wished to make the building a venue for art and exchange; what better idea to start with than to invite young, highly talented ensembles?