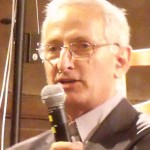 In 2009, Dominique Longchamp brought together the founding team of the Festival Valloire baroque, a project whose main lines he had devised.

The team, about twenty persons, either native of Valloire or “adopted”, rapidly evolved into an organizing team, managed, year after year, since the first season of the festival in 2010, by the initiator of the project.

Today, strengthened by the cohesion and harmony of their team, the organizers are increasingly skilled in the tricks of their “trade”. They are proud to receive messages of encouragement, such as that of a Savoyard politician :“I congratulate you for the quality of the work  you have achieved to promote this wonderful event that does honour to the cultural programme of the Maurienne valley.”

On August 3rd 2010, the festival opened with great fanfare, the period brass instruments of the Compagnie du Globe brilliantly sounding Monteverdi’s Orfeo and Purcell’s Music for the Funeral of Queen Mary. The church was crowded with Valloire residents and holidaymakers, all curious about this unprecedented “event”, also possibly seeking shelter from the drizzle that wetted the footpaths that day.

On July 28th 2019, for the opening concert of the 10th festival, dedicated to Versailles, the Poème Harmonique will sound its trumpets in Lalande’s Symphonies pour les soupers du Roy.

Brass and drums each time, this year to celebrate an anniversary of sorts… But what have we achieved over these 9 years?

Of course, the festival has expanded beyond all hopes: from 7 to 13 concerts and 2 to 4 libre-cours lectures, occasionally adding baroque dance shows and films… 2014 saw the first edition of the Off, the fringe festival of La Traverse, open to “young” ensembles from the Auvergne-Rhône-Alpes region, also including the Valloire enchantéconcert by choral ensembles.
Between 2010 and 2018, the number of events has doubled, and so has attendance!

Year after year, the festival has invited the best specialists of the chosen theme; whether well-known artists, often first-ranking performers, or “young” talents, these musicians were elected for their sensitive approach, their virtuosity and their generous musical commitment.
As to the choice of works, was there anyone at first to imagine the festival would ever host such monuments as The St. Mathew Passion, Monteverdi’ Vespers, Handel’s Messiah, and Campra’s Requiem or… The Four Seasons by Amandine Beyer?

What is new then, in 2019? Firstly, shorter but denser, the festival adopts the more convenient and attractive format of the one-week stay. Secondly, to assert our local anchorage, as yet another “territorial” initiative, the brass class of the Saint-Jean-de-Maurienne Conservatoire has been invited to perform a Musical Divertimento, for a truly sparkling 10-year anniversary Versailles Buffet.

In this milestone year, I wish to express my gratitude to all those that have contributed to such success: our private-sector sponsors, our institutional supporters, the team’s volunteers and professionals, the artists, the private donors and naturally our unwaveringly loyal public.

From its very start, the Festival Valloire baroque has always been more than just a festival. Mixing “effort and exultation, as jointly required and provided by mountain hikes and the performance or audition of classical music”, it is a state of mind.

A happy festival to you all!